They are listed here in groups which only differ in the lead end change:

There are 120 possible asymmetric pieces of work above the treble, excluding those with place notation 12345 at the lead end. Of these, 24 are false. The others are given two-letter codes, corresponding with their parts before and after the treble leads. Note that, when combining two symmetric calls in this way, the lead end change of both calls must match, so you can only combine calls which are in the same row of the table above. 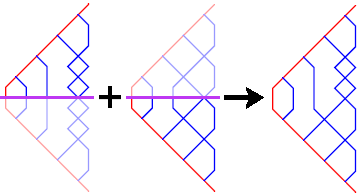 When this naming scheme was first set up, there were a few cases where the lead end changes didn't match, leaving the combination of the pair of calls open to uncertainty, not being sure whether to take the change at the treble's lead from the first half of the call or the second half. These were subsequently corrected in 1995 (Ringing World page 1215), but this does mean that it's now not obvious why some of the calls were named as they were. One, the Omega Bob, was later changed (along with the variation which used it) to an Ossian Bob, to recreate the connection.

Calls Below the Treble

There are just as many true calls possible below the treble as there are above; 24 symmetric ones and 96 asymmetric ones. The codes used are just the same, with an asterisk following them.

For instance, here are a Plain Bob Bob and a Denmark Hill Single.

Note, however, that asymmetric calls above the treble are reflected to produce the corresponding call below the treble. For instance, here are Julian Bob and a Loch Street Single.

There are a few calls which take place over a lead and a half. Blunderbus was an extent given in Campanalogia in 1677 and the others follow the same pattern. Each starts with a Burghclere Bob (uv*) and finishes with an Ascension Bob (vu*), both of which are below the treble. The notation uses the codes for the three calls, one after another. (Note that ev, dv, pv and qv are not valid codes, so there is no ambiguity here.)

Despite having earlier excluded calls that are intrinsically false, they can still be used in true multi-extent compositions. Here are two calls which include the identity change while the treble is leading. The first is what might be thought of as the Single for Plain Bob, by analogy with the Single used in Plain Bob at higher stages, with bells making 2nds, 3rds and 4ths, and those above 4ths place unaffected. The other is the Dragon Single, which was shown in the Ringing World in 1966 (page 263). These do not currently have code letters.