Variations - How It Works

Most of the change-ringing that we do is based on Methods. To ring more than a plain course, you use Calls, but these are not actually defined as part of the method. Tradition dictates that particular calls are usually used for certain methods and these are the ones shown in books, such as Diagrams. Generally, these standard calls for methods affect just one change, usually at the lead end, before the normal progress of the method is resumed. However, composers may choose to use other calls, either instead of those or in addition to them.

For instance, let us compare part of a plain course of Winchendon Place Doubles (left) with what happens when a Bob is called (right). The only difference between the two is at the change while the treble is leading, outlined in purple. 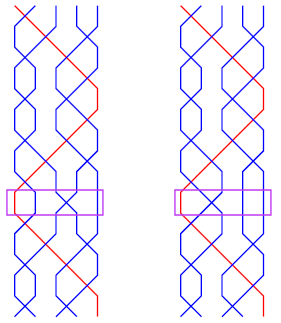 A Variation is defined as a named combination of a Method and a Call or Calls. In most cases, the calls affect more than one change of the method.

For instance, one of the most well-known variations is April Day, which is Plain Bob with a Grandsire Single. Here we can compare what normally happens when the treble leads in Plain Bob (left) with what happens at a Single in Grandsire (right). At the plain lead, you have bells making seconds, dodging in 3-4 and doing four blows behind. At the Single, bells make seconds and long thirds, with double-dodging in 4-5. 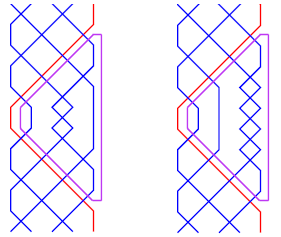 We can see that the two options differ in more than one change. To ring a variation, we take the whole of the section of work above the treble for the call required and insert it into the method. Note that the Single needs to be called earlier than you would normally call a Bob in Plain Bob, as the call has an earlier effect. To give the required 2 blows warning, it should be called at the treble's handstroke in 3rds place. 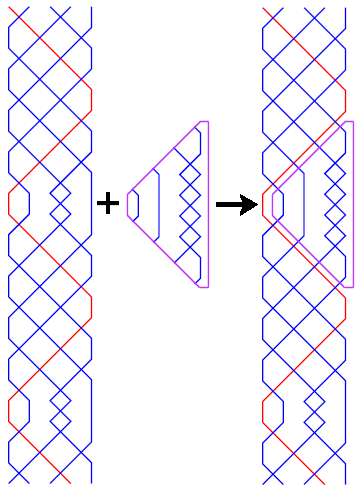 We can see that the bell making seconds is unaffected by the Single; it still makes seconds. The bell which was about to dodge 3-4 up makes long thirds instead. The bell that was going to do four blows behind double-dodges 4-5 up. The bell that would have dodged 3-4 down does a double-dodge in 4-5 down instead.

As the Single has an effect beyond the lead end, you can't just use place bells to work out which piece of work comes next. It's much more useful to know where you pass the treble and which work follows on from that. For instance, the bell that made long thirds at the Single will go back in and plain hunt, until it passes the treble as it goes from 3rds place to 4ths place on the way out - so it will do four blows behind next. 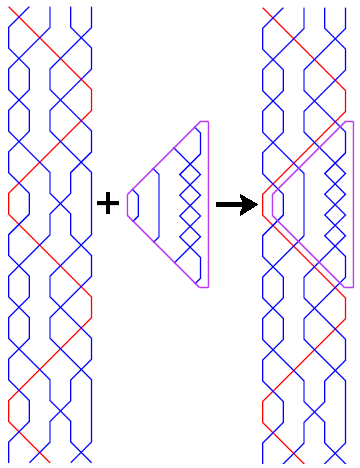 For instance, the bell that was lying behind when the Single was called had been expecting to ring 3-4 places down, but does a double-dodge in 4-5 down instead. Then it passes the treble (as it goes from 4ths place to 3rds place) and goes back to ringing Winchendon, so has to make 3rds straight away. It then goes up to the back again, meeting the treble there, so knows to try again to do 3-4 places down.

Calls below the treble

The call is inserted into the plain course as shown here. Note that the bell that has just done 3-4 up is unaffected, hunting in just as it would have done. Again, knowing where you pass the treble is very useful. For instance, the bell that dodges in 1-2 down at the Bob then passes the treble as it goes from 2nds place to 3rds place, so knows to dodge 3-4 up next. 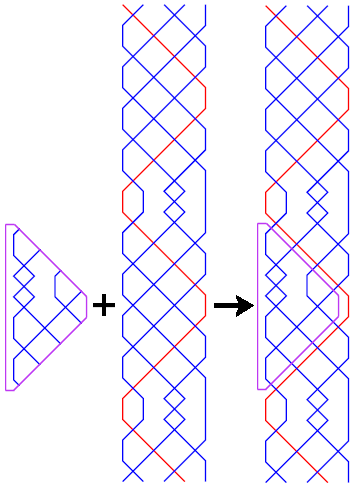 You can also have calls both above and below the treble, which is quite a challenge. For instance, St Kew Highway is a variation of Grandsire using an Antelope Bob (left) as well as a Barons Court Single (right). 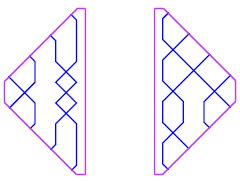 They are substituted in for the normal work of Grandsire, above and below the treble respectively, giving a potential combination like this. 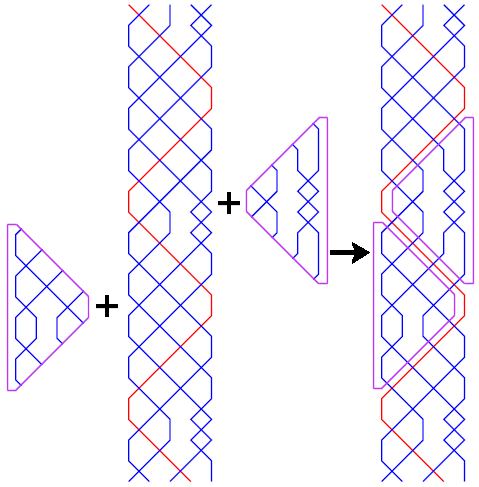